Originally when I was choosing bedding for our bedroom I was drawn to bright bold patterns like those from Dwell or Anthro. But in the end I chose something very simple. I just felt like those other patterns took over the whole room and my favorite bedrooms in the magazines had a simple hotel bedding pattern and then they had fun pillows as accents. So thats what I ended up doing.

I saw this duvet set on Crate and Barrel’s site and thought it had a great pricepoint. I love it because it isn’t a crazy pattern but it isn’t a plain white duvet cover. It has a little structure. 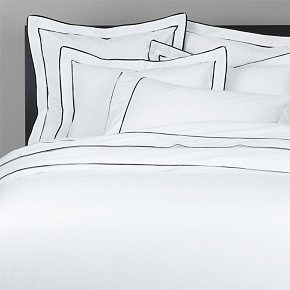