I’m so excited today to finally share the pictures of our pantry renovation! We did the kitchen and pantry at the same time but the kitchen is still not done (hopefully soon!) We did the renovations ourselves with the help of Paul’s parents (they are amazing!) I’ll get into to the nitty gritty down below but for now let’s look at the pretty photos. 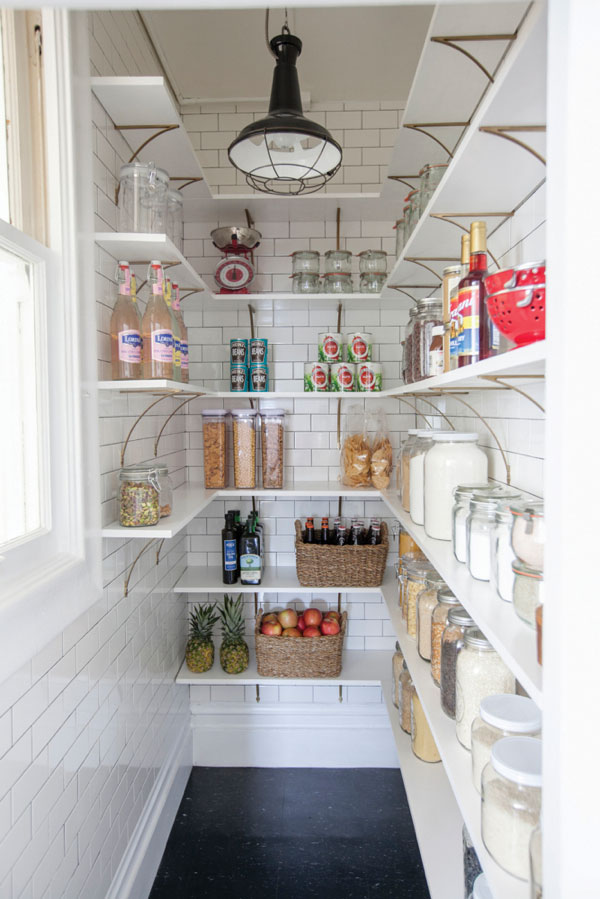 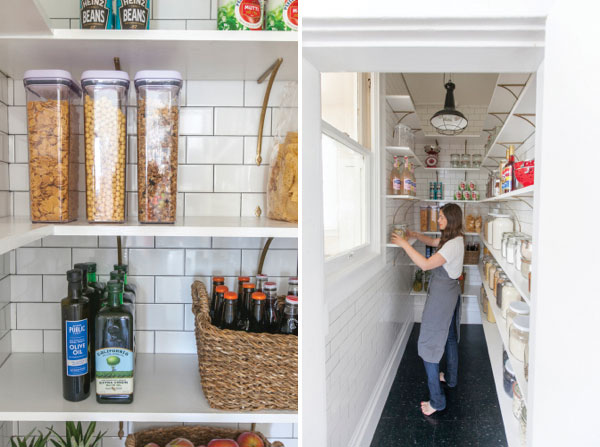 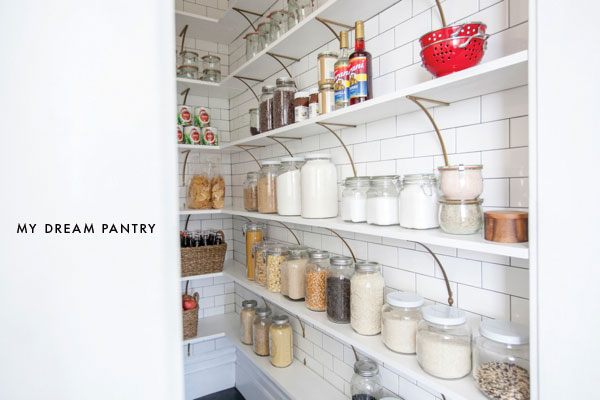 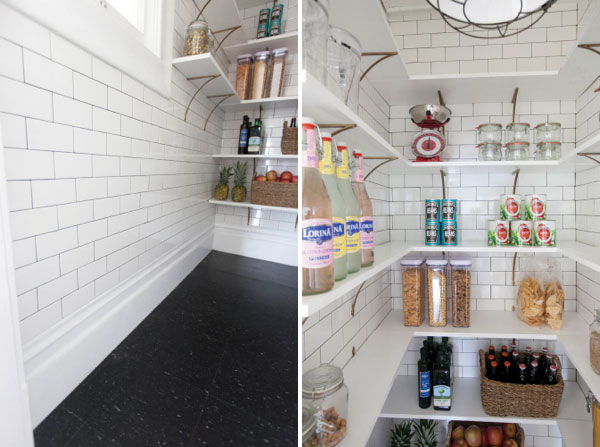 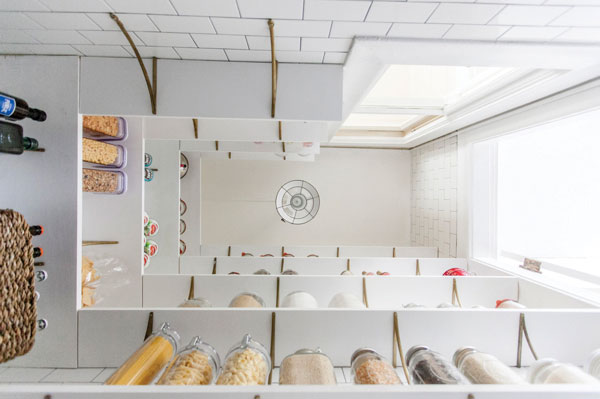 It really is my dream pantry. I am so thrilled with how it turned out, it makes me so happy. Here is how it all went down.

Here are the “before” pictures both before before and after demolition. When we moved in we knew we wanted to update the kitchen but I didn’t have any plans for the pantry. The shelves were original but some of them were broken and the built-in wasn’t very functional. The drawers were heavy and hard to open and the flour bin wouldn’t close. After living with it for 5 months we realized it was taking up a lot of space but we didn’t have a lot of use for it. I saw this picture that I had saved in my “house inspiration photo” and really got excited about making the pantry a beautiful space and not just ignoring it or slapping another coat of paint on it. (Below you can find my “inspiration photos” from my desktop. 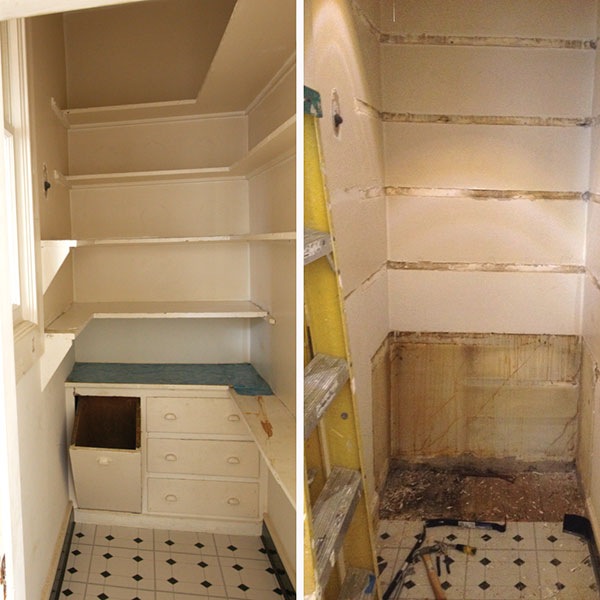 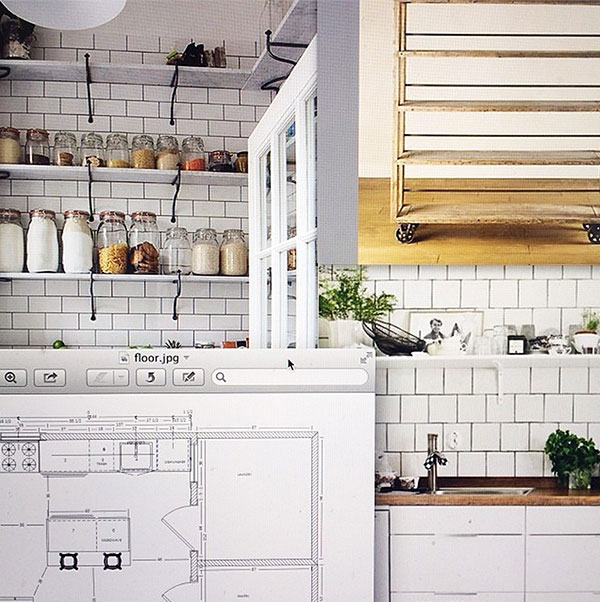 After the demolition we had some guys help take everything away. Then we got to work prepping the space. First we had to repair the floor where the built-in had been followed by scraping down the walls to make everything even and get rid of the built up paint where the shelves used to be. Next we installed the floorboards. I wanted really high floorboards that would match the rest of the house. We went to Lowe’s and were able to recreate a similar pattern by stacking a few different pieces together. After we installed them and the walls were prepped, it was time to tile! Paul’s dad taught us how and I discovered pretty quickly that I love it (grouting is a whole other story!) It is really satisfying to tile because for the most part it goes really quickly. After the tiling was done we finished the grout which is a messy and unpleasant job. After we touched up the tile and sealed it we installed the shelving. I had considered trying to do marble shelving like the inspiration photo above but we were already worried about the stability of the shelves, heavy marble shelving wasn’t in the picture this time around. Lowe’s had pre-sanded and pre-cut pine boards in the perfect sizes ready to go so we used those and painted them white (Valspar Swiss Coffee) before doing the shelf installation. It took me a long time to find the right hardware for the shelves. I looked on different sites for vintage and vintage-looking hardware and had a difficult time finding the right one. I had my eye on these brackets and when they were having a big sale I bought a bunch. 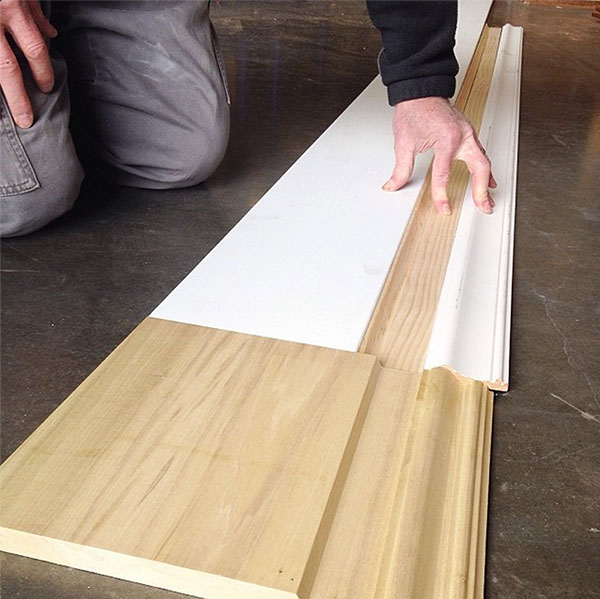 We have some long-term renovation plans so some of the decisions we made thinking “this will be fine for 3-5 years.” The flooring is the perfect example. The linoleum in the kitchen was faded in some parts and yellowed from the sun in others. We just needed an affordable alternative to tide us over until we do the larger renovation. I went to Lowe’s and the guy there showed me all my options and we ended up deciding on the VCT tiles. They were really easy to install and I had seen Daniel use them in his kitchen and I knew they would look good. The flooring took about half a day to install and the tiles were really easy to cut. This was one of the few things that wasn’t more complicated or more expensive than we thought! Winning!

Another issue we had was there was no lighting in the pantry. We had the electrical updated in the flat last month and they were able to rewire the pantry and we installed this gorgeous pendant from Schoolhouse Electric. It is so nice to be able to go in at night and be able to see everything!

We are lucky to live near Rainbow Grocery in the Mission. It’s an awesome giant hippie grocery store where they have huge bulk bins. It’s perfect if you don’t want to deal with all the packaging and just do jars in your pantry. They have the most beautiful beans and rice and legumes there (including the giant reusable jars.) Before we just had one little shelf devoted to our favorite rice and lentils but with the new pantry we could have a complete stock.

It is so satisfying when the final result comes out like you wanted it in your head. I cook and bake so much more now that our pantry is set up. Renovating was exhausting and if we did it again I would get more help, take time off work and not try to live without a kitchen. But I’m glad we did it and I keep telling Paul that I want to move our bed into the pantry because it is my favorite room in the house. 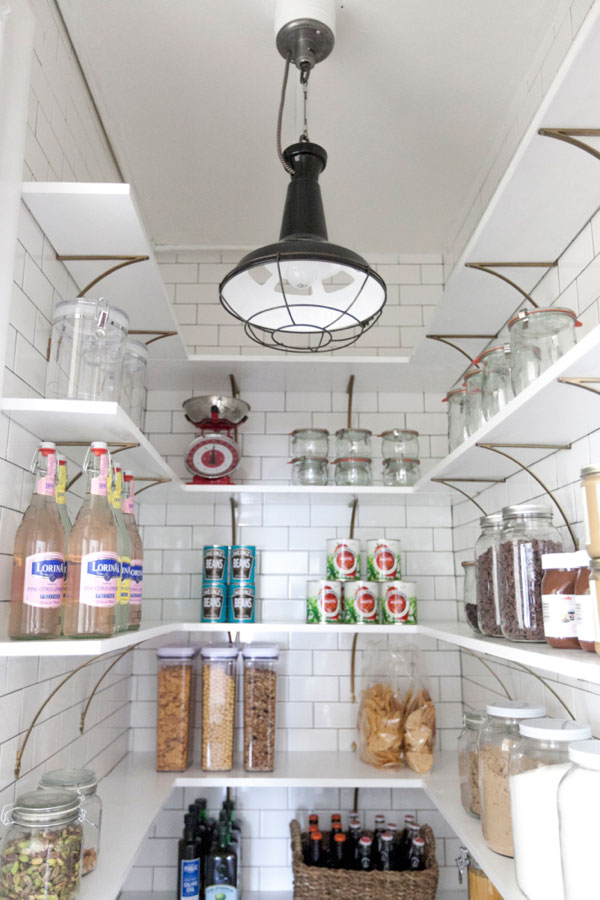 This post is Sponsored by Lowe’s. #SpringisCalling  All opinions are my own.