We Bought a House in San Francisco!

If you follow me on Instagram then you saw the news last month that we bought a house! Technically its just a flat (not a single family home) but we couldn’t be more excited. I made a list of goals when we were first married of things I really wanted to do over the next 10 years or so. The first thing on the list was: Buy a House in San Francisco. It was very unrealistic when I made that goal so the fact that we actually did it is thrilling. I cried when it became official. It is a beautiful 3 bedroom Victorian flat near Dolores Park. The apartment is 1700 square feet with a large kitchen, dining room and even a guest bedroom. It has beautiful original details and the apartment has been very well taken care of. We would like to eventually update the kitchen and bathroom and even knock out a wall or two but we are going to put that all on hold until our bank account recovers from that hefty down payment. The apartment is amazing but isn’t perfect. It doesn’t have a parking spot or a backyard and living on top of and below neighbors (even if they are nice) isn’t ideal. But the pros outweigh the cons a million times over so we feel really good about it. It is the perfect first home for us.

If you’ve been reading this blog any amount of time then you know we have a habit of living in small spaces. Our first apartment was a one bedroom apartment in San Francisco (pictures here, I cringe when I see these BTW.) After that we moved to a medium sized one bedroom apartment on Nob Hill, we had some children and they slept in a closet. After that we moved to a two bedroom apartment in Paris (Paris has cheaper housing than San Francisco so we upgraded!) Then last Spring we moved to our current 500 square foot apartment in the Mission District of San Francisco. We won’t move into the new house for a few months but home decor has been on my mind a lot. I hope you’ll indulge me a bit as I post about the new place and the projects we have in store. I’ve been waiting to own a house for so long I can’t believe its actually here. Here is a little peek of our long San Francisco hallway. 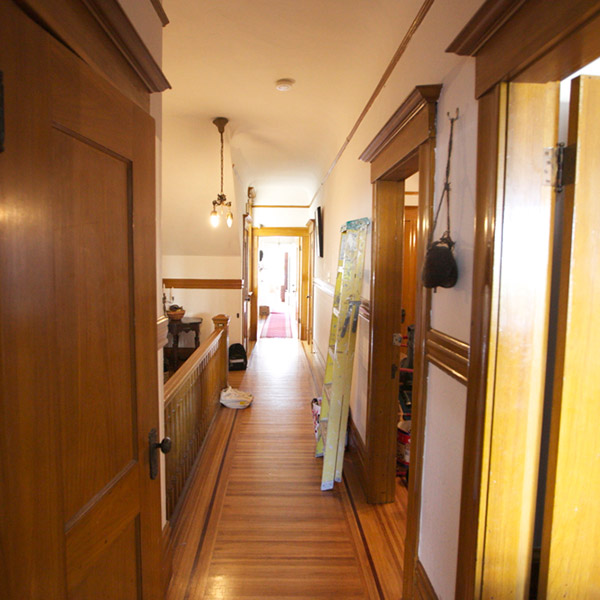